This past July we rescued a Manchester terrier from the Charlottesville, VA SPCA. I have to say that this experience has been a true test of our patience and ingenuity. This dog had been beaten and starved in a puppy mill environment and once he left the shelter, he instantly became his alter ego "Captain Insano" No matter what we did, we couldn't keep him contained and he suffered from severe separation anxiety, so as soon as my husband would leave for work, he would literally go insane, even biting me one morning prior to going in his crate.

Shadow is 2 to 3 years old and he mostly came by his name after we brought him home because he was a sneaky little ninja shadow. He moves so stealthily, that he often appears as a ghost in pictures. But we finally chose this name based on the fact that he is my husband's shadow. Mornings have gotten much better and although he has a long way to go, he now embraces his crate - even though we still have to have 3 master locks on it to stop the breakouts - and our other 2 dogs, Rocky and Buster seem to really love him.

One of the characteristics of this breed is that they get cold very easily. At the height of the summer when it was 100 degrees, he would lay in the full sun and soak up the rays while our other two dogs would be sitting at the door waiting to get back into the air conditioned space. About a month ago we had our first cool spell and this poor dog did nothing but shiver. It was about that time I decided I had better put my crafty skills to work to knit him a sweater. I searched and searched on-line for a sweater pattern that both looked good and would work up nicely and I finally came up with a custom sweater pattern by Jean Clement of Desert Rose Designs. The pattern is called "Darling Darby Sweater" and at first glance it seemed a little complicated, but now that I have finished, it wasn't bad at all and I can easily make another with a more precise fit. The other thing that appealed to me about this pattern is that the model is a whippet and Manchester terrier's are a terrier - whippet mix. Jean's pattern was well written and easy to understand.

I made this sweater using Lion Brand Yarn, Vanna's Choice in Grey Marble. I am not sure that I would use it again for this type of project, but I also bought a skein of Caron Simply Soft in a periwinkle blue that I am looking forward to trying next using this pattern. There was a discussion on a friends FaceBook page about knitting swatches the other day and this is one circumstance that you don't want to skip this step. Most seasoned knitters are guilty of passing over the swatch process when tackling a new project, but without working a swatch, you can't do the calculations for the custom sizing.

The other part of the pre-knitting process that could present a problem is getting precise measurements from the dog - especially if your dog is at all similar to this dog and it doesn't like to stand still for prodding. This is a fabulous custom pattern, but I am sure that the success rate is dictated by good measurements. As you can see, the back is a little long!
If your dog has long legs like Shadow, you will want to keep the finish ribbing on the leg openings on the short side. Otherwise, you will really struggle getting the sweater on and off the dog. I also found this pattern finished nicely around the back edge and underside. In the sweater underside view above, the left side of the photo shows this detail. All-in-all, I am very pleased with the results of this pattern. Especially, since this was my first pass!
Posted by Beth J. Beal at 12:35 AM 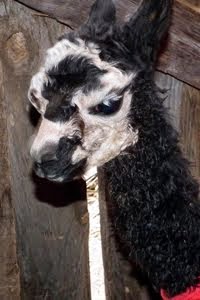